WikiSuite is the most comprehensive and integrated Open Source enterprise solution, so you'd expect that it took a massive amount of work. But how much? WikiSuite's cost to develop is well over US$50 million. 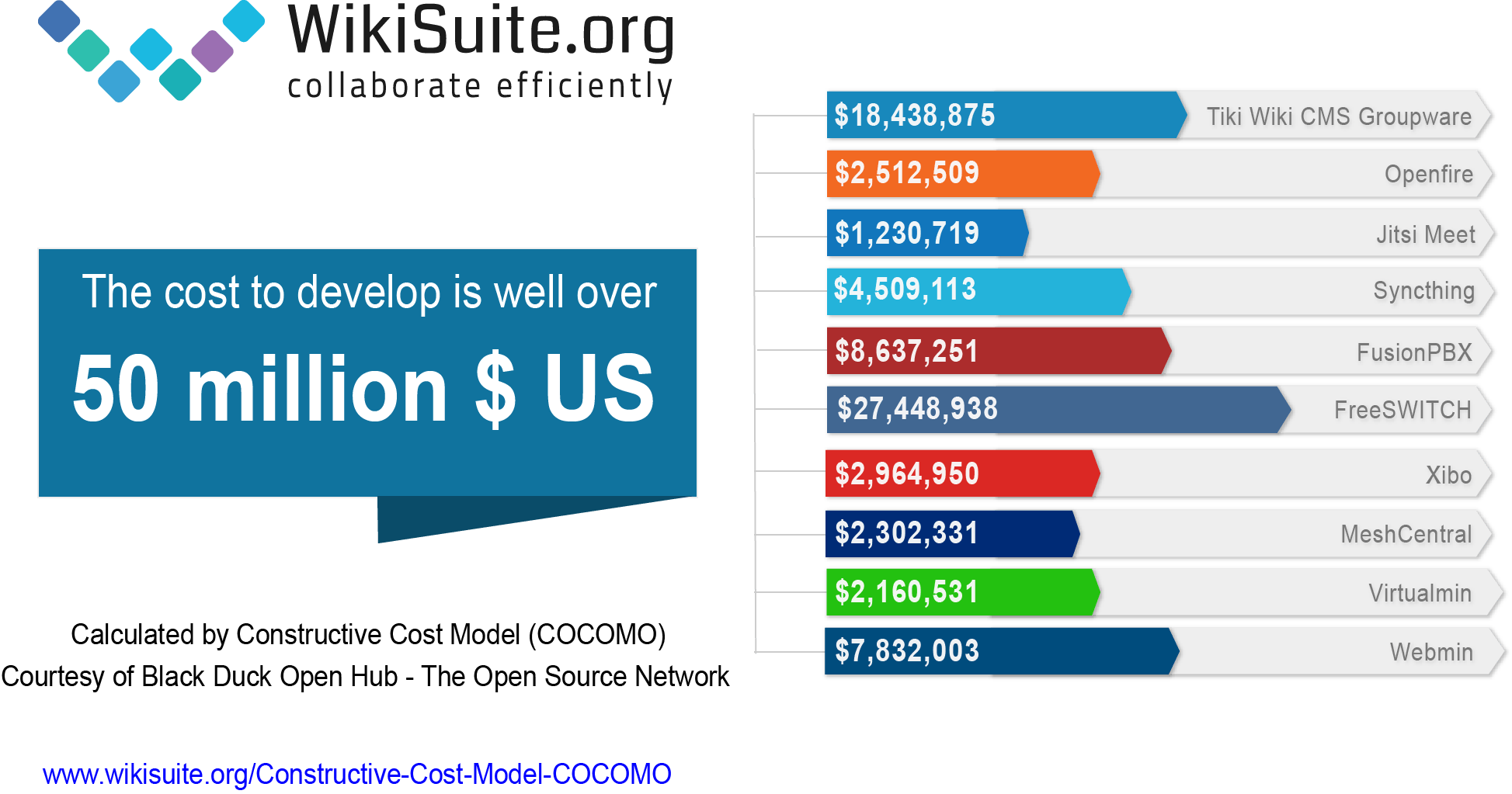 Really? How is this calculated?

Yes, really: If you tried to re-code WikiSuite using proprietary models. Below are the reports for various WikiSuite components generated by Black Duck Open Hub. Here is one example: https://www.openhub.net/p/openfire/estimated_cost, and it has this note: "COCOMO is meant to include the design, specification drafting, reviewing and management overhead that goes along with producing quality software." More info:

How can it be free and who paid for this?

Like Wikipedia, GNU/Linux and Firefox, WikiSuite is the result of massive collaboration. And you are warmly invited to join!

How do you arrive at "well over US$50 million"? Are you including the cost of GNU/Linux?

No. Just the Linux Kernel would cost billions to redevelop.

This is intentionally as small as possible since we focus on upstreaming code to the various Software Components.

And this includes the Database Web Apps builder (Tiki Trackers)

In some cases, it's actually underestimated. COCOMO counts the number of lines of code. But a project like Tiki Wiki CMS Groupware has been in active development for over 18 years, and there have been over 77,000 code commits. This battle-tested code costs more to develop than a younger application that would have the same number of lines of code.

As of December 31st, 2020, Tiki's cost of development is estimated at USD$16,701,644, and the latest revision is #77641, which represents about $215 per commit. Given the work that goes into software development, and since "COCOMO is meant to include the design, specification drafting, reviewing and management overhead that goes along with producing quality software.", the cost is clearly not overestimated. And that doesn't even count the 125+ external dependencies. Think about it. Each dependency represents a distinct community / code base / bug tracker / etc.

Ok, but is this for plugins / duplicated functionality?

No. There is minimal feature overlap / code duplication in WikiSuite because our philosophy is to avoid it as per our component criteria model. While it's true that some of WikiSuite's components have apps or plugins (Openfire), it's mostly a deployment mechanism, and there is no mess (community fragmentation, etc.) as described at: http://pluginproblems.com/

Given this huge value, isn't it a high cost to maintain the apps?

Many of the software components are 10 to 15 years old, so they are quite mature. Maintaining a mature app, even with it undergoing occasional revamps, is a tiny fraction of the effort of rewriting it. And now, each of the applications has a community / ecosystem that uses it and is highly motivated to maintain and develop it.

If another suite has more lines of code (and thus a higher dollar amount), does it make it better?

No. The goal is to have all desired features with minimal complexity, and a sufficient community to sustain it. Some other suites are focused on facilitating self-hosting of many apps, including apps with identical functionality, but WikiSuite is very opinionated about the apps that compose it. We believe supporting more than one application for the same need adds unnecessary complexity and fragmentation. We believe WikiSuite's model is the best way to have the most features, with the least complexity. Please see: http://pluginproblems.com/

Ok, but I am not going to use all the features

That is true of all feature-rich software. But the economics of software development don't make it feasible to build software exclusively tailored for one use case. Community Free / Libre / Open Source software will necessarily want to cater to a wider community and get more users and contributors.

Indeed. The total of the figures in the screenshot above is US$78 million. But then


So if we go with US$78 million, the figure can be fairly challenged as being exaggerated. And then, the narrative shifts to this topic (are we being honest with the numbers). This would be a distraction. We will never know the precise "cost to develop". It's an approximation to provide information on the scale/magnitude. Thus, the chosen strategy is to claim that WikiSuite's cost to develop is "well over US$50 million", which is really hard to discredit. And most humans are not that good with big numbers: US$50 million is just as impressive as US$78 million to most humans

Even if we exclude dependencies (which is debatable), and not count all the components, we can see that the cost to develop is "well over US$50 million". This demonstrates the following: